Will he stay or will he go? Djokovic's hearing underway

After four nights in an Australian immigration detention hotel, Novak Djokovic got his day in court Monday in a deportation case that has polarized opinions and elicited heartfelt support for the top-ranked tennis star in his native Serbia.

Djokovic had his visa canceled after arriving at Melbourne airport last week when Australian border officials ruled that he didn’t meet the criteria for an exemption to an entry requirement that all non-citizens be fully vaccinated for COVID-19. 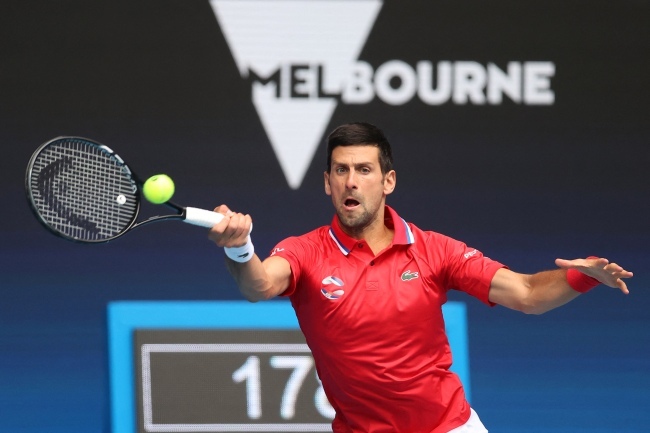 Serbia's Novak Djokovic hitting a return against Canada's Denis Shapovalov during their group A men's singles tennis match on day one of the 2021 ATP Cup in Melbourne on February 2, 2021. [File photo: DAVID GRAY/AFP]

His lawyers have since filed court papers in his challenge against deportation from Australia that show Djokovic tested positive for COVID-19 last month and recovered. He used that as grounds in applying for a medical exemption to Australia's strict vaccination rules.

The hearing appealing the visa cancellation began in Melbourne on Monday in the Federal Circuit and Family Court of Australia.

On Sunday, Australian media reported that a federal government bid for extra time to prepare its case against Djokovic was denied. The application, made on behalf of Home Affairs Minister Karen Andrews during the weekend, sought to adjourn the final hearing by two days — just five days from the start of the Australian Open.

Djokovic’s lawyers filed 35 pages of submissions in which they outlined 11 grounds of appeal. They described the decision to cancel the visa as illogical and unreasonable.

Government lawyers were to argue for his deportation later Monday.

In Serbia on Saturday, Djokovic’s family held a rally in support of him in Belgrade for the third successive day, and Prime Minister Ana Brnabic assured him of her government's support over his visa battle to ensure he can enter Australia and defend his Australian Open title. The tournament begins Jan. 17 — just a week from his court date.

“We’ve managed to make sure gluten-free food is delivered to him, as well as exercising tools, a laptop and a SIM card so that he is able to be in contact with his family,” Brnabic said. It comes as Australian media reported that immigration officials denied a request to have Djokovic's personal chef cook meals for him in the immigration hotel.

About 120 vaccine opponents, according to police estimates, marched Sunday in the northern Greek city of Thessaloniki, chanting, among other things, slogans in support of Djokovic.

The protesters, who included a number of health workers suspended because of their refusal to be vaccinated, gathered in the city’s iconic White Tower and marched to the Serbian Consulate.

There is a widespread pro-Serb sentiment in Greece based on both countries’ adherence to Eastern Orthodox Christianity.

Djokovic is nine-time Australian Open champion. He has 20 Grand Slam singles title, a men’s record he shares with Roger Federer and Rafael Nadal.

In Djokovic's perfect world, he would have been eating food cooked by that personal chef, worked out at a gym and trained every day on-court since his arrival, mingling with his support group and friends along the way.

Instead, he's been confined to his room in a modest immigration hotel in downtown Melbourne, with guards in the corridor.

The case has become a complex one.

Djokovic was given a medical exemption backed by the Victoria state government and Australian Open organizers on Jan. 1, based on information he supplied to two independent medical panels. He was approved for a visa electronically.