Fauci: US should consider vaccine mandate for US air travel 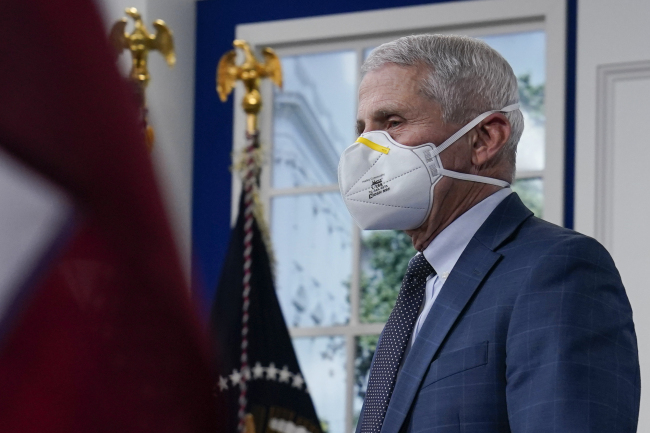 Fauci, President Joe Biden’s chief science adviser on the pandemic response, said such a mandate might drive up the nation's lagging vaccination rate as well as confer stronger protection on flights, for which federal regulations require all those age 2 and older to wear a mask.

“When you make vaccination a requirement, that’s another incentive to get more people vaccinated," Fauci told MSNBC. “If you want to do that with domestic flights, I think that’s something that seriously should be considered.”

The Biden administration has thus far balked at imposing a vaccination requirement for domestic air travel. Two officials said Biden’s science advisers have yet to make a formal recommendation for such a requirement to the president.

The officials, who spoke on condition of anonymity to discuss internal deliberations, said a vaccine mandate on planes could trigger a host of logistical and legal concerns.

The U.S. currently mandates that most foreign nationals traveling to the U.S. be fully vaccinated against the coronavirus, though citizens and permanent residents only need to show proof of a negative test taken within a day of boarding.

Federal rules don’t require people travelling by air within the U.S. to show a negative test. Hawaii requires travelers to test or show proof of vaccination to avoid a mandatory quarantine.

Biden did not respond to questions on whether he was considering implementing a domestic air travel vaccination requirement, but he told reporters the subject was discussed on a call with the nation's governors Monday morning.

“They asked Dr. Fauci some more questions about everything from whether or not he thought he was going to move to test at home — I mean, on air flights and that kind of thing,” Biden said of the call before departing the White House for his home in Rehoboth Beach, Delaware.

During the virtual meeting with governors, Biden pledged the full support of the federal government to states facing surges in COVID-19 cases from the more-transmissible omicron variant and a run on at-home tests that dominated headlines over the holiday season.

“My message is: If you need something, say something, and we’re going to have your back any way we can," Biden said. He acknowledged long lines and chaotic scenes as Americans sought out testing amid the case surge and as they looked to safely gather with family and friends over the holiday.

“Seeing how tough it was for some folks to get a test this weekend shows that we have more work to do,” he said. He referenced his administration’s plan to make 500 million rapid tests available to Americans beginning next month through an as-yet-to-be-developed website.

Arkansas Gov. Asa Hutchinson, the National Governors Association chairman, raised concerns Biden's plan could get in the way of state efforts to boost supply of tests.

“That dries up the supply chain for what we might offer as governors,” he said, saying the lack of supply “has become a real challenge.”

Biden assured Hutchinson that the federal effort won’t interfere with state actions. “This gets solved at the state level,” he said.