Biden to call out Trump on Capitol riot anniversary

President Joe Biden will turn the screws on Donald Trump by calling him out Thursday for "singular responsibility" in provoking the mayhem on January 6 last year, when the outgoing Republican leader's supporters stormed Congress.

Biden's decision to use his speech on the anniversary to squarely blame Trump and Republican allies for their role in the unprecedented attack on US democracy will mark a sharp escalation in his approach to Trump and the riot.

Through the first year of his presidency, Biden has preferred mostly to ignore Trump, who still refuses to acknowledge his defeat in the 2020 presidential election and continues to spread conspiracy theories to his millions of followers about being the true winner.

But in a speech from inside the Capitol's Statuary Hall -- where exactly a year ago a Trump mob rampaged through to try and stop certification of Biden's election win -- the Democratic president will firmly blame his predecessor, Press Secretary Jen Psaki said Wednesday.

"I would expect President Biden to lay out the significance of what happened at the Capitol and the singular responsibility President Trump has for the chaos and carnage," she said.

"President Biden has been clear-eyed about the threat the former president represents to our democracy," she said.

Asked if Biden would use Trump's name, Psaki said "we're finalizing the speech, but I think people will know whom he's referring to."

Earlier Wednesday, the Capitol police chief, Thomas Manger, said his forces would not be caught unprepared again, as they were last year.

And Attorney General Merrick Garland also promised that justice was being done, saying he was "committed to holding all January 6th perpetrators, at any level, accountable under law -- whether they were present that day or were otherwise criminally responsible for the assault on our democracy."

However, in the political sphere, the country remains dangerously divided.

Underlining the stunning partisan split, senior Republicans appear set to skip commemorations organized by the Democratic-led Congress on Thursday, including Biden's speech and a prayer vigil.

Senate Republican leader Mitch McConnell and others from his party were set to be away in Atlanta, Georgia, attending the funeral of the late senator Johnny Isakson.

In an opinion piece on Fox News, Republican Senator Josh Hawley, a leading supporter of false claims that Biden's 2020 victory was suspect, referred to January 6 as a "demonstration" that "some demonstrators" marred.

"Gathering for a political demonstration is not a crime. On the contrary, it is a right expressly protected by the US Constitution," he wrote.

Trump himself continues to push the lie that the 2020 election was stolen by Biden -- a conspiracy theory dismantled in multiple court findings and vote recounts. 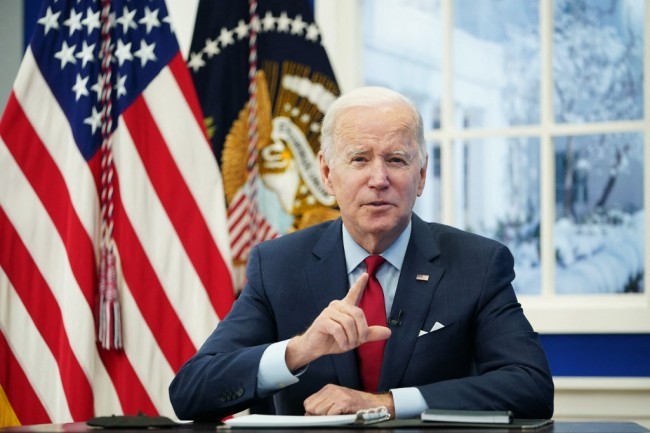 US President Joe Biden speaks with members of the White House Covid-19 Response Team on the latest developments related to the Omicron variant, on January 4, 2022, in the South Court Auditorium of the White House in Washington, DC. [Photo: AFP]

He had been planning a press conference at his Florida home to steal the limelight on Thursday, but abruptly abandoned the plan in a statement Tuesday that nevertheless continued to claim that the 2020 election was a "crime."

Writing in The New York Times, former Democratic president Jimmy Carter said the United States "now teeters on the brink of a widening abyss. Without immediate action, we are at genuine risk of civil conflict and losing our precious democracy. Americans must set aside differences and work together before it is too late."

Democratic Senate Majority Leader Chuck Schumer also called for a profound look at the state of the nation in the wake of the ugly episode.

"Without addressing the root causes of the violence on January 6, the insurrection will not be an aberration it could well become the norm," he warned.

In his speech, Garland said the authorities had so far arrested and charged about 725 people across the country in connection with the attack.

However, after criticism that the Justice Department has moved too slowly to tackle the leaders and address accusations of a deeper dangerous plot to overthrow the election, Garland pleaded for patience, suggesting that investigators are moving up the chain.

"We resolve more straightforward cases first because they provide the evidentiary foundation for more complex cases," he said.

And echoing widespread fears that radicalized Americans are turning on their institutions, he promised to "address the rising violence and criminal threats of violence against election workers, against flight crews, against school personnel, against journalists, against members of Congress, and against federal agents, prosecutors, and judges."

"Such conduct disrupts the peace of our public spaces and undermines our democracy. We are all Americans. We must protect each other," he said.