Night｜Haikou, a city of flavours

Nightlife, an essential signature dish for those on the island.

When night falls, you can call your friends and go to the night market to get a variety of snacks and treat your stomach; take advantage of the high spirits to go to the bar in groups to exchange glasses of wine and have a reckless HAPPY, or hold the hand of your lover and go to KTV to sing, bursting out all the emotions and playing a dark night. 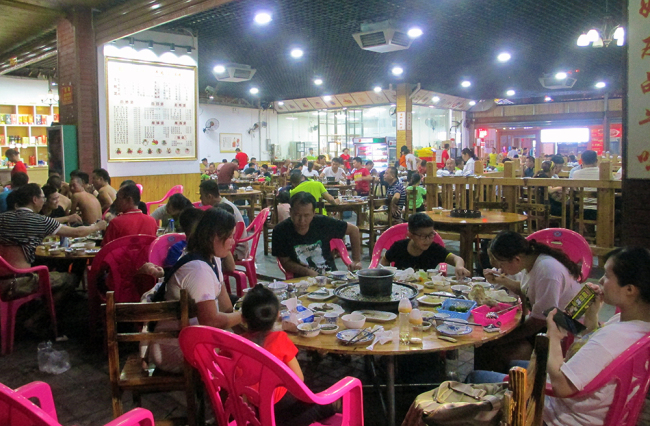 Haikou night market allows citizens and tourists to taste the authentic "night life" of the city. Photo by Xu Ersheng

A wide range of special dishes. Photo by Xu Ersheng

This is a true reflection of the nightlife in Haikou, Hainan, after the epidemic. The nightlife is not just for young people, it is for all islanders. If you are a visitor from outside the island, there is no need to make a fuss, it is the right thing to do to eat, drink and be merry!

In the post-epidemic era, the richness of the night decorates the coconut-flavoured city, giving Haikou a unique tropical flavour.

After night falls, Haikou is even more charming. As a coastal city, Haikou has become more flavourful and charming. The "night economy" is an important window of Haikou's life and culture, and a new growth point for consumption.

It's night time and we strolled around to try places like the Rimae Customary Night Market, the South Gate Night Market of Hai University,, the Binlian Tourist Night Market and the Jinpan Night Market. Here, you can choose from a wide range of snacks from all over the country, and there is everything you need to worry about whether you have enough balance in your account. 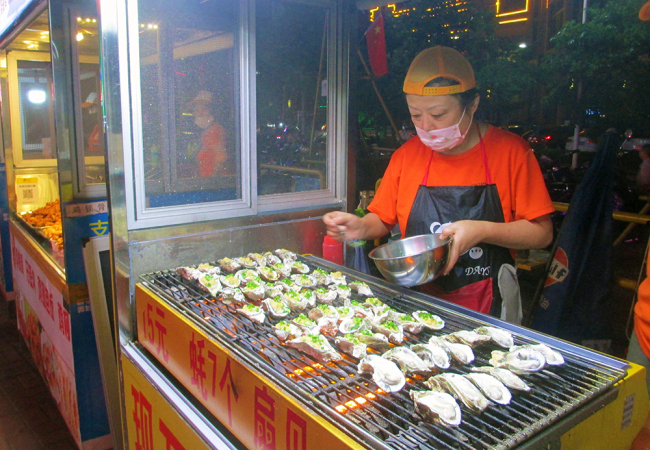 If you're busy and don't have time to cook, it's easy to bring your wife and children or your husband and daughter to the night market for a casual meal!

In the brightly lit night market, with its hundreds of stalls and a wide variety of people, you can always find a taste of home and enjoy the "fireworks" of your hometown. 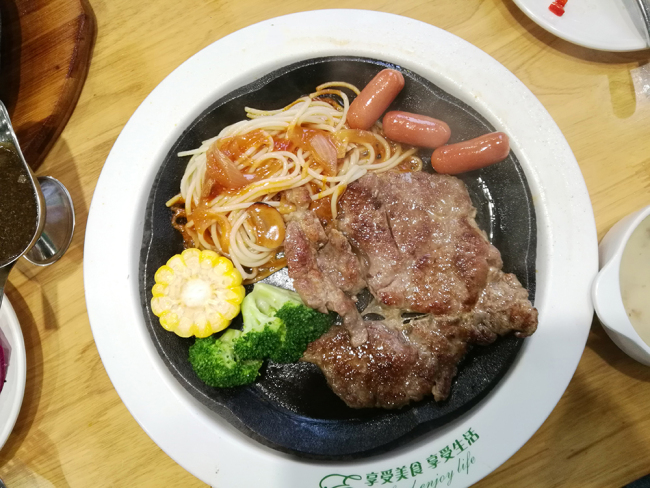 Seek out the pasta + steak inside the Rimae Chew Night Market. Photo by Xu Ersheng

At weekends, Ms Xia from the northeast especially likes to take her daughter, who is in primary school, to the Haikou night market. "Read a million books, travel a million miles. In a colourful world, where exactly is the path for yourself? We need our children to open their legs to find it. Sharpening the will and accumulating experience will lead to the road to success." Ms. Xia is full of joy and speaks happily of her thoughts.

As the night wore on, there were also big men jerking off, yelling and singing with their friends over wine. When they're drunk, they even roll up their sleeves and get into the action, ignoring the red faces and hot ears.

The 10,000-strong seafood square at the locomotive is perfect for out-of-town travellers to Haikou, where fresh seafood is available to meet all your expectations of the sea.

In addition, coconut carving ornaments, handmade bags and other local Hainan specialties are dotted around the major night markets in Haikou. Visitors to this area can not only satisfy their taste buds, but also buy the handicrafts they desire.

When you've had your fill and are tired of shopping, you can also enjoy a great movie at the cinema or take your children on a wooden horse ride or hoop ride to relax and have fun.

In contrast to the boldness of the northerners, the southerners seem somewhat ebullient.

As the doors of reform and opening opened wider and wider, people from all over the country and the world began to flock to Hainan, the habits of the aborigines of Haikou began to change among their descendants, with genetic inheritance seeping into the diverse cultures over time.

Multiculturalism thus becomes a catalyst for a rich nightlife.

As a tourist, you can't plan a trip to Hainan without the Mission Hills Haikou Feng Xiaogang Film Commune, an arrangement that actually stems from a love of Feng's humorous style. The highlight of the trip is to travel directly to the Republic of China and walk through the old Beijing streets of the last century.

A night out at the Feng Xiaogang Film Cove lived up to everyone's expectations. You can't get enough of the night show + bubble show + open-air movie / Glory Theatre movie + outdoor karaoke + BBQ and beer!

Enjoy the unparalleled sensory experience of a beautiful hairpin in a cheongsam at a young man's pace, with a cold beer and new friends in the neighbourhood jerking off together.

The bustling glamour of Shanghai at night is recreated here, says the beautiful spokesperson of the Feng Xiaogang Film Commune, with its colourful night-time activities.

Giving you three months of revelry! Eat, drink and weave your dreams of summer nights.

If travelling through the city isn't enough for you, then head to the bars and KTVs to get high. A Karaoke party with no attention paid to what's going on outside the window.Photo by Xu Ersheng

In Haikou Aiguo Chao Entertainment Bar, "Drinking to the song, having fun in time" and "Drinking from work, wine cures all diseases". Get drunk and unlock your life! Dance your hands to the music!

Be a singer and feel like a big shot at KTVs such as Golden Lion Entertainment Club, The Voice, Night Electric, Bacchanal and Starlight Party, or go to a music bar and have a drink and listen to moving music.

The more the night goes on, the better the taste. If you like a peaceful atmosphere, take advantage of the night and the starlight to go to a drink shop like "Mash & Screw" with your loved one and indulge your soft girl's heart in the signature hand-pounded lemon tea by the retro table lamp. The sweet and sour blend of iced sugar makes it a youthful, hip LIKE taste.

The "night-time economy" leads the nation

In recent years, Haikou has taken on the important task of building an international tourism consumption centre and has been vigorously developing new businesses such as night food, night shopping, night tours and night entertainment, combining tourism, culture, art and other forms with commerce to promote the flourishing of the "night economy".

Enjoy a delicious meal at a star hotel as night falls. Photo by Xu Ersheng

Zhan Xia Li, secretary-general of the Haikou Night Market Development Association, revealed that night markets are different from restaurants in that they are characterised by open spaces and civilian consumption. From the analysis of the night market operation and management in the last three years, the stable and sustainable development of the night market is the best manifestation of the city's "night economy" and the easiest way to retain tourists. Throughout Taiwan and South East Asia, where tourism can flourish, the 'night economy' is an essential component of the city, and an infrastructure project that promotes the internal circulation of China's economy and stabilises the livelihoods of society.

Zhan Xiali believes that, as a tropical coastal tourist city, Haikou is a key destination for consumers who come to purchase duty-free goods, and the night market is also a key destination for them because of its civilian consumption and open consumption scene. Compared to the night-time economy, which only emerged in 2020 after the epidemic, Haikou has been leading the way in the development of the night-time economy in all provinces and cities across the country, making the South Gate Night Market and Jinpan Night Market of the University of Haikou one of the designated night markets for study tours.

According to incomplete statistics from the Haikou Night Market Development Federation, the total turnover of night markets in Haikou last year exceeded 400 million yuan. The Haikou Night Market is the "late-night eatery" in the hearts of Haikou people, a "must-visit" destination for tourists and an integral part of the "night economy".

The increasing number of tourism businesses has led to the steady development of the "night economy".

The person in charge of the Haikou Municipal Bureau of Commerce said that, relying on well-known attractions such as Haikou Bay and Cavalry Old Street, multiple measures have been taken to collect ideas, organize activities in scenic spots, enhance the atmosphere of the neighborhood, enrich the night tour mode, and drive the prosperity of the city's night economy with a point. At the same time, the new media publicity platform will be used to enhance the publicity of the city, promote the high-quality development of Haikou's "night tourism economy", and promote Haikou's night tourism economy and business environment to go hand in hand and reach a higher level.

With facilities and performances being improved since April 1 this year, the reopening of the park is sure to bring a new and refreshing night-time experience.