Romance｜Haikou, a city of emotions

Once a deserted village with few visitors, the village of Quangyangdong in Lingshan Town, Meilan District, Haikou, is now famous on the internet for its "898 Art Village".

In less than three years, the village has been transformed by the implantation of art cells and the preservation of old houses and tiles, and the involvement of artists to activate unused houses.

According to reports, the Kwon Yeo Dong Village currently has six exhibition halls, more than 40 art institutions and various studios where artists specialising in music, painting and calligraphy, sculpture and more gather. This year, the village will also add commercial elements such as cafes and art shops.

The equally artistic Fang Yuan Village in Haikou is a simple yet refreshingly pure paradise in the ancient village + B&B, where you can be immersed in the characteristic courtyard space of northern Qiongbei, between sculptures, paintings and collections. The village organically integrates the eight elegant cultures of "qin, chess, calligraphy, painting, poetry, wine, flowers and tea", allowing visitors to enjoy an immersive experience of slow living.

Yao Cheng Village is one of the famous historical and cultural villages in Haikou City, and is the main vein of the famous historical and cultural town. The village originated in the Wanli period of the Ming Dynasty, when Fu Guanmei, the 57th grandson of the founder of the Fu clan, moved to the village as the prime minister of Anren County, and took his four sons to live in three separate villages, Xibian, Xipai and Qunlong, until the late Qing Dynasty, when the three villages were joined together as Yao Cheng Village.

The revitalisation of the countryside has been promoted, and the scenery of Yaocheng, with its "swallow tail and dragon ridge, golden mountain and silver bow, grey walls and green tiles", has been greatly enhanced. With the new look of the old village and the nostalgia of the hometown, Yaocheng Village has now become a good place for families to visit. A cheerful bamboo dance with guests who have come from far and wide. Photo by Xu Ersheng

Deep into the countryside, we can return to nature. A painter's brush and white walls are used as paper to decorate a village that has been silent for a hundred years.

Walking into the old revolutionary village of Zhongkai, surrounded by greenery, green tiles and white walls and beautiful scenery, I felt the strength to rise upwards in my heart and a sense of happiness that I have never felt before.

In the Haikou countryside you can not only experience art, but also kiss the taste of flowers. As a tropical flower countryside tourism spot, the Haikou Triangle Plum Sharing Farm attracts a large number of citizens and tourists every year, and the villagers of Biangyang Village in Qiongshan District have made their fortunes.

If you have enough leisure time, you can also visit Benli Village in Hongqi Town, Haikou, to experience the passing years of the intellectuals.

The village of Shicha in Shishan Town, Haikou, has adopted the innovative model of integration of "agriculture + culture + tourism", with the volcanic dendrobium industrial park as the core, and has created a number of special lodges and farmhouses to attract tourists to sightsee, ride, pick, stay and buy agricultural products. 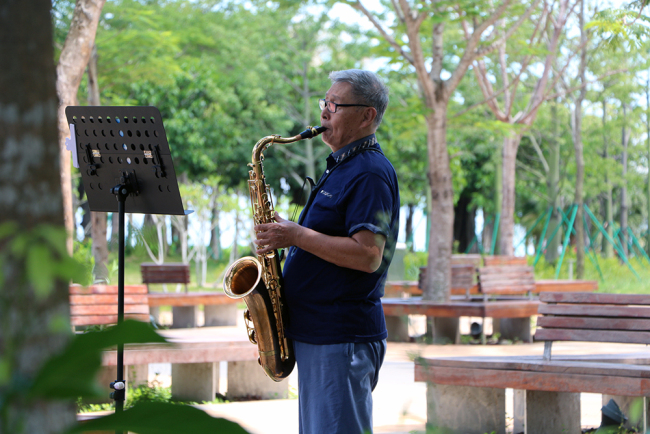 The countryside is rich and beautiful, full of verdant; melons and fruits are fragrant and picturesque ...... Haikou this beauty, will never leave with you.

Haikou is also a great city to visit and hit the town, with a different kind of fashion.

As the 'Charming City of China', Haikou has always been able to handle the old and the new with style.

In 1928, Zhou Chengmei, a patriotic businessman, mobilised overseas Chinese to donate and raise funds to build a clock tower in Haikou in 1929, modelled on coastal cities such as Guangzhou and Shanghai, at the Changdi Road pier, which is far from the entrance to the sea, in order to unify the time. The walls were built with red bricks and white lime. The clock is set on the fifth floor and chimes every 30 minutes. The Haikou Bell Tower has become a symbol of maritime culture and commercial civilisation. Photo by Xu Ersheng